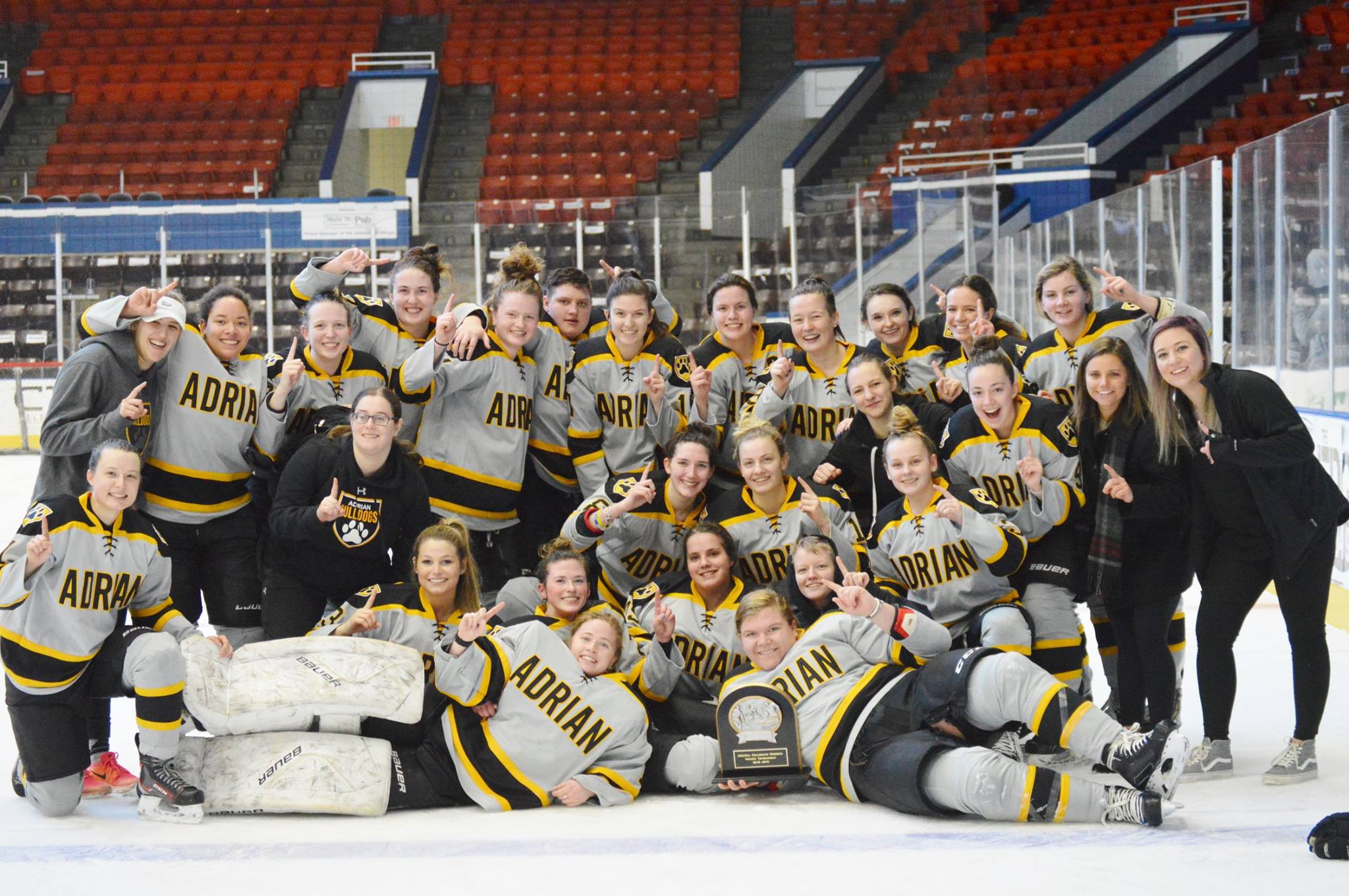 With a round robin setting, Northern Michigan and Adrian College took the stage first, with extra hockey needed. The Bulldogs struck first just six minutes into the game with a Hannah Chase goal. Carlee Casteel and Katie Hayward would be credited with the assists on goal one for Adrian. The Wildcats would find a goal of their own ten minutes later from the stick of Lynessa Maninga with a pass from Victoria Wozniak to tie the game. Overtime was needed in game one of the tournament, and three minutes into the extra hockey, Chase would put in her second goal to tally the win. Victoria Poland was in net for Adrian with the win after stopping 14 of 15 shots faced, while Briana Holman was in net for Northern making 16 saves on 17 shots.

Friday night’s second game saw Notre Dame and Loyola-Chicago face off. The Ramblers would grab their first win with a score of 3-0. Holly Harrison grabbed the game winner in period one, while Sophia Riedel would tally the other two goals, one in the second and one in the third to finish off the game. Harrison and Maddy Shea would find assists on the two Riedel goals. Julia Smith was in net for the win stopping all 14 shots on goal, while Grace Cummings stopped 22 of 25 shots for Notre Dame.

Saturday’s four game day started with Adrian College taking on Loyola-Chicago in a 1 vs. 2 matchup. Casteel would tally her first goal of the weekend as she would put one in just 36 seconds into play. Chase and Hayward both getting assists on the first Adrian goal. Harrison would make it a tie game with a goal for Loyola with less than a minute left in the first period. Kaylie Burck with the assist on the Rambler’s first goal. Loyola would take the lead just into the second period as Riedel would grab her third goal of the weekend, with Shea assisting yet again. Casteel would strike again to tie the game for the second time during play. Chase and Allyson Vanantwerp with the assists on the second Bulldog goal. At the 16 minute mark Grace Pavlovich broke the tie and put Adrian back into the lead with help from Vanantwerp. The third period would only have a single goal, and it would come from Chase to lock in Adrian’s second win of the weekend. Smith was in net for Loyola, stopping 35 of 39 shots, while Poland stopped 25 of 27 shots for Adrian.

The final Saturday morning game had Notre Dame and Northern Michigan vetting for a win. The Irish would start the game with three unanswered goals from Kiera Dwyer, Maura White and Marissa Kivi. Assist tallies on the three ND goals were recorded by Colleen Lynch, Claire Doyle and White. Regina Moloney broke the ice for Northern Michigan, as she would find open net for a 3-1 game 12 minutes into the first period. Dwyer quickly answered back to take the Irish lead back to three to finish out the first twenty minutes of play. The Wildcats would find the only two goals in period two to make it 4-3. Those two goals would come from Shae Blewett and Emma Vermette. For the Wildcat assists, Wozniak would grab her second assist (on the Moloney and Blewett goals), and Isabella Oldania and Blewett adding assists as well. Blewett would tally her third point of the morning in a second goal that would take the game to overtime, for Northern Michigan’s second time. No goals were found in the extra period of hockey, so a tie would be recorded between the Wildcats and the Irish. Holman was in net again for Northern, stopping 38 shots on goal while Cummings was between the pipes for Notre Dame making 18 saves.

The Saturday afternoon games saw a total score of 18-0, in the favors of Adrian College and Loyola-Chicago. The Bulldogs put up a 10-0 score against Notre Dame in the first of two afternoon games. With three goals in the first period, four goals in the second and three in the third, the Bulldogs saw nine different goal scorers. Cristina Rotondo (2), Maria Granger, Avery Huxter, Emily Letke, Mackenzi Heisner, Sara Knapp, Olivia Stevens, Chase and Pavlovich all put in goals in Adrian’s third game of the weekend. Nine different players tallied assists including, Elizabeth Anderson (2), Kathleen Droba (2), Jena Cruz, Elle VanAntwerp, Granger, Hayward, Pavlovich, Chase, and Casteel (2). In net for Notre Dame was Cummings, who made 32 saves, while Poland was in net for Adrian stopping all 18 shots on net. With this win, the Bulldogs advanced to the League Championship game.

In Saturday’s second shutout win, Loyola-Chicago punched their ticket to the championship game for a second season in a row with an 8-0 win over Northern Michigan. Five different skaters for Loyola grabbed goals in the win including, Hannah Bergom (3), Michelle Cottrell, Olivia Fossier, Harrison (2), and Shea. The Ramblers had Smith in net for their third game, who stopped all 13 shots faced in their final round robin game. Holman was in net for Northern who made 45 saves on 53 shots faced.

Sunday’s championship game featured Loyola-Chicago and Adrian College. The Ramblers, who were W2 Tournament Champions in 2018, entered the championship game as the No. 2 seed, while Adrian College sat at No. 1. The Bulldogs struck first with a goal from Droba, a backhander from inside the circles, to take the lead at the 6:24 mark in the first. Granger with the lone assist on the first goal of the game. Then, while on the penalty kill, Bergom would soar the puck out of the zone to connect with Shea who would sneak one past Poland to tie the game. Droba would yet again find the back of the net for Adrian in the second period with help from Allyson Vanantwerp to gain back their lead with plenty of hockey remaining. The Ramblers could not find a goal throughout the rest of the second, nor in the third, and the Bulldogs would take the win to become the 2019 CCWHA Playoff Tournament Champions. With this win, Adrian secured a spot at the ACHA National Tournament to represent the CCWHA in Texas.

The All-Tournament teams are as follows: 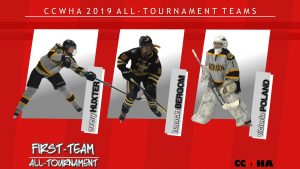 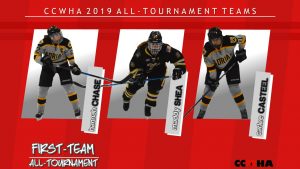 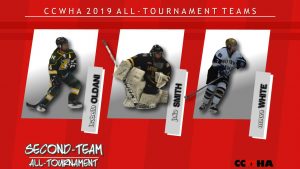 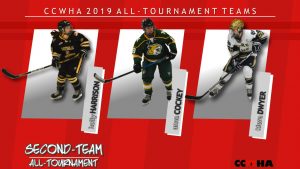