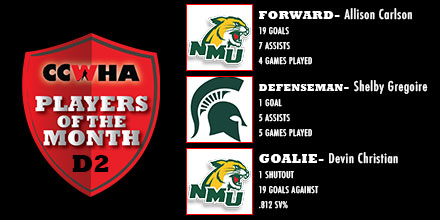 CCWHA FORWARD OF THE MONTH

Carlson grabbed at least one goal in every game during the month of October for Northern Michigan. The sophomore tallied a hat trick and an assist in the 7-4 win over Lakehead University, while also registering a single goal in the 3-2 second win to complete the sweep of Lakehead. Carlson grabbed 11 points (9g, 2a) in the sweep of Iowa State for a month total of 16 points in four games. Carlson currently leads the CCWHA stat columns in five different categories : goals per game (3.00), assists per game (2.00), points per game (5.00), total goals (6) and total points during CCWHA games with 10.

CCWHA DEFENSEMAN OF THE MONTH

Gregoire, a fresh defenseman this season, tallied six points (1g, 5a) in the five games played during October. Gregoire helped the Spartans to a sweep of Central Michigan with four points (1g, 3a) in the first win, 12-1, and two assists in the 6-3 second victory. The Spartan junior leads the CCWHA in total assists, with five, while averaging 1.25 assists per game and 1.50 points per CCWHA game.

CCWHA GOALTENDER OF THE MONTH

Christian, a freshman for the Northern Wildcats, sits at 5-1 so far this season, while also leading the CCWHA in goals against average (.50). Christian has allowed just 19 goals against, with one shutout and a .812 save percentage facing opponents like Lakehead University, Iowa State University and Loyola University – Chicago.